What kind of place is Nopporo Forest Park?

It was opened as part of Hokkaido’s Centennial Project in 1968 to protect and enhance the precious natural forest and to give residents a recreational area for getting closer to nature. It has been designated a Prefectural Nature Park.The majority of its 2,053 hectares are national forest, parts of which have been designated as Showa no Mori recreational use forest and a wildlife sanctuary.Walking paths crisscrossing the park let visitors enjoy nature observation, therapeutic forest walks, and in winter, cross-country skiing.

What kinds of creatures live there?

In the natural forest inside Nopporo Forest Park, there is a comparatively large amount of forest remaining that is situated in a transition zone between temperate forest and subarctic forest.It is a mixed conifer and broadleaf forest. Its broadleaf forest contains Mongolian oak, Japanese Judas tree and Japanese linden, and its subarctic conifer forest consists mostly of Sakhalin fir.Small and medium-sized mammals inhabit the park, including foxes, raccoon dogs, varying hares, Hokkaido squirrels, Pteromys volans orii (subspecies of Siberian flying squirrel) and small Japanese field mice.

Moreover, approximately 140 kinds of birds can be seen, including the black woodpecker, a protected species; owls; the blue-and-white flycatcher; the narcissus flycatcher; the long-tailed tit; the Japanese tit; and the great spotted woodpecker.Rare insects including Damaster gehinii and the Japanese predacious diving beetle, as well as insects that are quite popular with children including Terpnosia nigricosta and the Miyama Stag Beetle, can also be seen there. 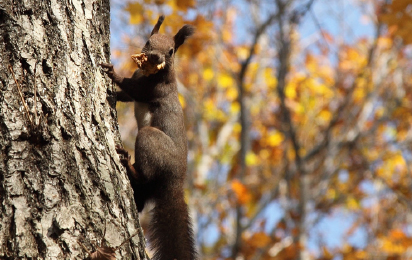 It is against the rules to bring animals, plants and other creatures into Nopporo Forest Park.

However, dog walking is allowed on some walking paths around Hokkaido Centennial Memorial Tower and Hokkaido Museum.